Together they form a massive crowd. This crowd becomes known as a number. This number gets to be so large, we can’t comprehend it.

And a number is our ticket to overlooking people. Consider the 50,000 in Kakuma, a refugee camp in Kenya. Now look into the eyes of one. He’s teeming with hopes, dreams, a personality, and a soul.

says William,* forced to flee to Kakuma from his home in neighboring South Sudan when civil war broke out.

“But God’s calling is not limited to a specific place. I mean, it found me here, with a soccer ball.”

Wanyama,* a passionate believer in South Sudan, was frustrated.

“I struggled many a year to plant churches,” says Wanyama. “All I wanted was for people to know the great love of God; His love as in His Son.”

For whatever reason, his ministry efforts gained little traction…until he discovered the soccer ball.

“God showed me sports as a connecting point with the community,” he says.

Trained as a Sports Friends coach, Wanyama grabbed 10 soccer balls and his vibrant faith. The result? Five new church plants in South Sudan attracting kids of every age. William was one of them.

Wanyama created an environment of hard work, discipline, fun, and faith. Each night, the sun would dip over the horizon as kids wiped beads of sweat from their brows. And then questions would rise up—questions about life and God.

“Thanks to the ‘soccer church’ Wanyama founded, I met Jesus,” says William. Before civil unrest in South Sudan began stirring, Wanyama discovered William to be mature beyond his years. His newfound faith grew quickly and securely. Their deep theological conversations continued late into the night. With William’s newfound desire to share the good news, he and Wanyama became partners in the gospel.

And when the civil war forced residents to flee, Wanyama packed up his five churches, linked arms with William, and together they replanted them in Kakuma.

Even in hard times like this, involving war and displaced living, the gospel is flourishing.

“The people walking in darkness have seen a great light; on those living in the land of deep darkness a light has dawned.” – Isaiah 9:2 (NIV)

Today, services take place every Sunday under the shade of a large tree. Wanyama and William disciple new believers with every kick and goal.

William couldn’t be happier that, for now at least, his ministry “field” is the refugee camp of Kakuma. By partnering with SIM, you reach people in hard places with the love and truth of Jesus Christ.

Please prayerfully consider giving a gift to Sports Friends to reach more youth with the gospel. 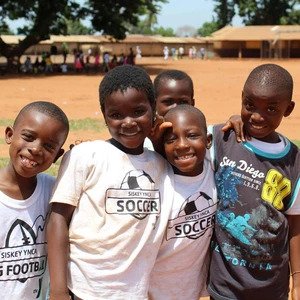 Send One Youth to Camp
$50 GIFT
Train a Coach
$75 GIFT
Sponsor One Local Leader
$1000 GIFT
Share:
*Names and photos may have been changed for the sake of privacy and safety of our workers, ministry partners and those we serve.

Previous Story Finished With Fistula
Next Story Our God: Fisher of Men
Back To Top
×
Learn more about SIM © 2020 SIM. All Rights Reserved
Past Issues